The first insulin shot that I gave myself was motivated out of anger. It wasn’t anger at my diagnosis or even my diabetes, at least not on the surface; it was anger towards my mother. I was just over 12 years old, a pre-teen caught up in the drama of middle school. I can’t even tell you what I was so mad at my mom about, but that fury led me away from our heated discussion, down the hall and into my room, slamming the door behind me. I lay there brooding in my bed, watching the fan above me spin in slow circles. I knew my mom would try to come talk to me, but in that moment, I was determined not to see her.
Unlike most moody teenagers, I now found myself in an even bigger predicament. I needed my mom in order to eat, a loss of independence I was still grappling with. Having only been diagnosed with Type 1 Diabetes a few months earlier, I still relied on my parents to give me my insulin shots before my meals. Suddenly I went from slowly gaining my independence and more responsibility to having my every move micromanaged and being treated like a child.
In that moment, all I knew was that I was going to be stubborn. I was not going to see my mom, not even so she could give me my shot.
I was angry. But now it wasn’t just at my mom. I was angry at my loss of control, my loss of my independence, and in a way, the loss of my freedom. I had had enough; I was determined to take back control of my life.
I was going to give myself my insulin shot.
I had always hated needles, closing my eyes whenever receiving a shot. The unease still remained even after dealing with needles on a daily basis. I got up from my bed and opened the dresser drawer. With the boxes of syringes, test strips, needles, alcohol swabs, and other supplies, the drawer looked like something out of a hospital room. Sometimes I still couldn’t believe this drawer was for me. 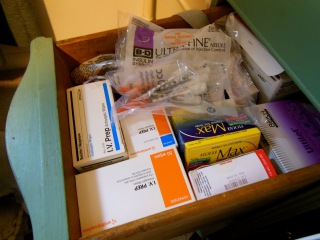 I pulled out the insulin vial, alcohol swab, and a syringe. After watching my parents perform this task hundreds of times, I knew exactly what I needed to do. The rubbing alcohol felt cool against my skin as my heart began to race. This was really happening. I stood there pinching my skin with one hand, holding the needle with the other. I can still remember the conversation in my head as I attempted to coach myself through the endeavor.

“Come on, you can do this! It probably won’t even hurt. Well, it might hurt, but if it does, it’s only for a couple seconds. Do you really want to have someone give you a shot every time you need one? Of course not! They aren’t the ones with diabetes, you are. This is your responsibility. Okay ready? One, two, three…now. Now. Now…”
Fifteen minutes passed as I just stared at the needle. Nothing ever looked as sharp and menacing as that needle poised against the skin of my stomach. My hands were shaking and I was light headed from holding my breath in anticipation. I could practically hear my heart beating outside of my chest. But I knew I was too close to quit; I knew I had to do this.
The first insulin shot that I gave myself was motivated out of anger. But anger was the last thing on my mind when I raced from my room, down the hall, and into my mother’s arms, hugging her in triumph.