Two nights ago I had one of the highest blood sugars that I can remember in years. I wrote a whole post about what potentially may have led up to it, where my self-management went wrong, and just how horrible the experience was. I was ready to publish the post today, but then last night I had one of the lowest blood sugars that I’ve had in years as well. I can only think of 2 other times in the past 13 years when it was this low. I went from 515 one night, to 22 the next (for those who aren’t familiar with blood sugar numbers, I strive for a blood sugar around 100-120).

Both numbers are scary. The 22 was much more of an immediate danger, but the 515 was disappointing, perplexing, and just overall awful. Both numbers are extreme. Both are dangerous in their own way and both have left me feeling out of sorts.

As I write this, my blood sugar is at a comfortable 125, clearly recovered from both incidences. I’m mad at myself, especially for the high number. I know that it’s my fault. I wasn’t as vigilant and careful as I should have been, and because of that, I faced the consequences. Looking back there are certain moments where I could have intervened earlier so that the results weren’t as catastrophic, but at the time I did not realize how important those moments were. Even with the low, I heard my CGM buzzing, but I ignored it because I felt fine.

The high number was in part a result of my first spinning class.  Before I started the class I checked my blood sugar. It was 248. This number is too high, but I figured the intense exercise would lower it (my first mistake) and didn’t want to drop low during the class. So I didn’t give any insulin and disconnected my pump.

When I finished the class, I took out my CGM Gigi, but it was giving me the out of range signal and hadn’t been tracking my blood sugar. I should have tested my blood sugar at this point, but I didn’t. I went home and ate a low carb dinner, but I forgot to bolus for the few carbs I did have, only making the situation worse.

It was now a little before 10 and I started to recognize the symptoms of a high. I took out my meter and tested my finger. 439. WHAT?! That can’t be right. I tried a different finger, 498. Shit. One more finger, 515. At that point a said four letter word that I will not write here. I immediately took out a syringe and gave myself a shot of insulin and changed my infusion set. At this point I started to feel really sick, the nausea had started to set in. I laid in my bed feeling awful. It wasn’t until around 1 am when my blood sugar finally returned to normal. 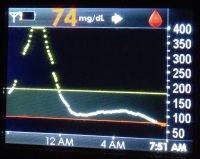 I honestly don’t know what caused the 22 or why I didn’t feel it sooner. I must have overbolused for my dinner and just didn’t feel the symptoms early enough. I didn’t believe the number on the screen at first, testing 2 more fingers for confirmation. What was so strange about this low was that even though it was so drastic, the symptoms weren’t as strong as even when I’m in the 40’s or 60’s. Probably why I didn’t catch it earlier in the first place. I know that much lower I am at risk for passing out, so I ripped open 2 packs of fruit snacks and chugged some orange juice. I didn’t care if I went high, I just needed my blood sugar to go up. And it did, it kept going up and up until I was woken at about 2 am with a blood sugar now in the 300s. Clearly stuck on a roller coaster of highs and lows, I gave insulin and went back to sleep, waking up to a low in the morning. Low, high, low…it’s exhausting. And frustrating. And annoying.

No more extremes. I can’t take it. Even though it feels like my diabetes is all I think about at times, I have to do better. I have to be more vigilant, more cautious, more disciplined. I know it’s my responsibility. I cannot have another night like the past 2 nights, I hope that I never see either of those extreme numbers again.

3 thoughts on “Going to Extremes”