What things can make dealing with diabetes an emotional issue for you and / or your loved one, and how do you cope?

Like most things in life, I think it’s pretty difficult to completely separate the emotions from an event. Pretty much everything about dealing with diabetes is emotional, just to varying degrees. And those emotions not only change over time, but also day to day, even hour to hour. When I was first diagnosed, poking my finger to check my blood sugar was the most agonizing process, there were tears and tantrums. Now I don’t even think twice. Some days I don’t even bat an eyelid at a high blood sugar, other days I get really upset and frustrated.

And sometimes, there are so many different emotions involved in a single event. Let’s take a look at an episode that happened last week.

Here’s what happened with all the emotion removed:

My blood sugar dropped to an objectively low number. My body experienced certain physiological symptoms for a finite amount of time. After 15 minutes, my body returned to normal functioning.

Now let’s add the emotion back in:

It was the guy I’ve been dating’s birthday. We were hanging out in his apartment after a nice celebratory night out when I started to feel low. I ate some fruit snacks. But 10 minutes later I wasn’t feeling any better, in fact I was feeling worse. I checked my blood sugar, 33. I stared at the number. “Uh oh. Not good. Not good. This is not good.” The low seemed to suddenly hit me full force. I got off the couch and laid flat on my stomach on the floor. For some reason I find the hard ground comforting during extreme lows. Looking back, I realize this was probably a very strange and maybe slightly alarming action for someone to witness who has never been around someone with a very low blood sugar before.

“What do you need?” The concern was clear in his voice. 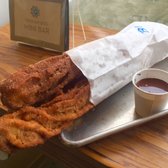 We had stopped at a local restaurant that gives you a free churro on your birthday and had saved it for later. Typically I use fruit snacks to treat my lows, but in this low stupor, I clearly had one thing on my mind.

Churro in hand, he got down on the floor next to me, holding it as I took greedy bites. I remember mumbling about how good it tasted, even cold. “Stop talking, keep eating.” Gladly. At some point, I remember saying “I’m not going to pass out, but if I do, call 911.”

As I laid there waiting for the churro to work its magic, the emotions hit. Here we were trying to have a nice celebratory birthday evening and I probably had just scared the shit out of this poor guy. “I’m really sorry.” I was. This wasn’t how I wanted to be spending his birthday, or really any day for that matter. Then the insecurities. What if I scared him off, what if he decides he doesn’t want to deal with this? Or me? Then the frustration of just having such a bad low and feeling truly awful and wanting to feel better already. Then the gratitude of realizing I’m with someone who will get down on the floor next to me and hold me during my lows.

After 15 minutes, the low fog began to fade away and I started to feel better. And the night went on, life goes on.

The version of this story with no emotions is so much simpler and straightforward and yes, sometimes I do wish I could remove the emotions from managing my diabetes. But the emotions also serve a purpose. They remind us what’s important, they spur us to take action, and they can bring us closer to those around us.

Read more posts on this topic from other diabetes bloggers here.