I love the show, The Big Bang Theory- it’s one of my favorite. In fact, last year I even dressed as Amy Farrah Fowler for Halloween. But, for the first time ever I cringed while watching a recent episode. Penny was sitting in an interview to be a pharmaceutical rep. While talking about her previous job experience as a server at the Cheesecake Factory, she says that she once convinced a group of bigger customers to order cheesecake, ones that even had an insulin pump. Then the interviewer says to her, “I have an insulin pump.” 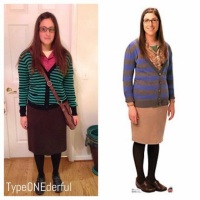 In my experience, it’s very rare that a television show accurately depicts diabetes, Type 1 or Type 2. Maybe the statement was just a way to communicate that the customers had diabetes. But to me, Penny’s statement seemed to imply that if you have an insulin pump, your diabetes must be really bad. But that’s not the only assumption that one could make from that statement. Someone could assume that having an insulin pump means that you must not be doing a good job taking care of yourself, that you’re to blame for your present state, that an insulin pump is something you get when all else has failed.

I was watching the show with someone who knows that I have an insulin pump, but not a ton more. We haven’t had a lot of discussions about my diabetes yet and what it means to live with Type 1. We haven’t talked about my pump and what it does and what my life was like before I had it. Rather than taking the opportunity to educate, I instead cringed on the inside, hoping that my friend was not silently making assumptions about me and my diabetes based on that statement. In that moment, I hated that show for making me feel self-conscious or ashamed even for those few seconds.

Because I’m not ashamed. Having an insulin pump is nothing to be ashamed about. I love my pump. It has given me tremendous freedom, control, and flexibility that I didn’t have before.

My insulin pump is the tool that helps me keep my blood sugar under tighter control. I didn’t go on it because my control was poor, I went on it so that I could have even better control. My pump is what helps me take care of myself and be healthy, not a symbol of the opposite.

Maybe not everyone interpreted Penny’s statement the way I did, Maybe I was extra sensitive to it. But, in my opinion, The Big Bang Theory has it wrong, Penny has it wrong. I am not ashamed.