It’s Halloween! A day of spooky, scary fun! In honor of Halloween, here’s a list of spooky and slightly scary diabetes moments!

Phantom Buzzing. You feel your pump vibrate, but when you check to see what caused it, there’s no explanation and it didn’t actually vibrate. Spoooooky.

The Dead Zone. When you ignore the first signs of a low battery and then all the sudden your pump shuts down. Quick, where are those extra batteries?!

The Demon Drop. When your blood sugar is dropping super rapidly. Think triple arrows down! Ahhhh!

The Ghosting Glucose. When you think you have something with you to treat your low, but then you check all your pockets and they’ve somehow disappeared!

The Vampire Bite. That sharp pain you sometimes get when you insert your infusion set or sensor. Ouch!

The Morning Zombie. How you feel after a night of constantly being woken up from alarming pumps or CGMs for high or low blood sugars or calibrations. I just want to sleeeeeep.

The Witch’s Spell. Forget eye of newt and toe of frog. You want a complicated spell? Try a calculating a dual bolus for pizza with a high blood sugar trending down and active insulin on board.

The Mummy Wrap. When you poke your finger to check your blood sugar and it just won’t stop bleeding so you wrap a tissue around it a few times to stop the blood.

The Dagger Spike. That sudden sharp spike in your blood sugar, the one that keeps rising even though you bolused and gave insulin. Please come down already!

The year I was diagnosed with diabetes, my parents made me donate all of my Halloween candy. They may have let me keep a few pieces, but my pillow case full of tempting treats was donated to kids who did not have the opportunity to trick-or-treat. I understood why my parents were making me do this, but secretly I still was pretty angry and sad. It wasn’t fair. Why did I have to give away my candy? None of my friends had to. After all, Halloween is all about the candy, or so I thought. The next year, instead of handing out candy, my parents decided to hand out little bags of pretzels. Yes, we became that house. Although it could have been worse, my dad is a dentist, at least we didn’t give out toothbrushes…

The next year I probably went out trick-or-treating with friends and was told that I could have the candy in moderation (which really is good advice for anyone). But honestly somewhere between that first Halloween with T1d and now, Halloween became about so much more than the candy.

Every year since I was little, my sister and I have carved our pumpkin with my grandpa. As we’ve become older, that tradition has become even more important and special. 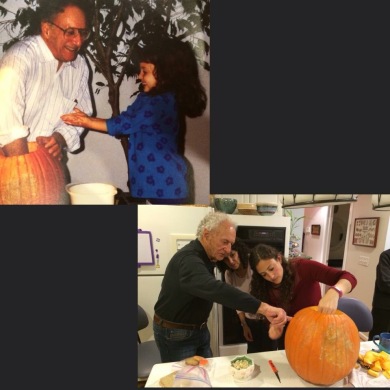 Seems kind of random, but I really enjoy cooking the pumpkin seeds and trying out different seasonings. This year I made some that were cinnamon sugar, some that were a Cajun type seasoning, and some plain salt ones. I also think I ate them all that same day. Oops.

I love making my Halloween costumes, and have gotten pretty creative over the years. I seem to especially enjoy dressing up as food items.

Candy will always be part of Halloween, but for me, Halloween is much more than that. And yes, it’s probably for the best that as a diabetic I am less focused on the massive amounts of sugar. But it doesn’t mean that I can’t still enjoy it. Over the years, I’ve heard a lot of comments, assumptions, and jokes made about diabetics and candy and Halloween. But you know what, nothing is black and white with diabetes including how we celebrate candy filled holidays. I’ve found many reasons to love Halloween, and they have nothing to do with my diabetes. Although, Halloween candy is great for treating low blood sugars. So fellow T1Ds and everyone else, enjoy your Halloween! Carve your pumpkins, wear your costumes, eat your candy…or don’t! Just have fun!

I love Halloween. Not because of the candy, I love Halloween because of the opportunity to be creative when it comes to costumes. I love to make my Halloween costumes each year and I get really into it. People’s reactions to my costumes is the true reward for all the time and effort. This year, I wanted to extend the costumes to a new subject, my diabetes. 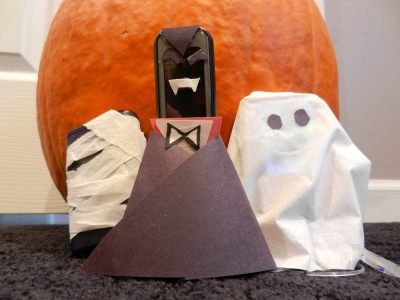 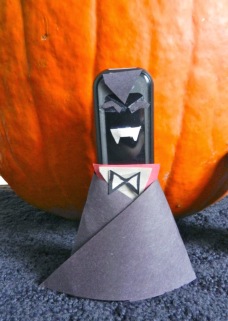 “I vant to suck your blood!”

That’s all I could think about when I decided to dress my glucose meter up as Dracula. I mean isn’t that really all a glucose meter really wants, lots of blood? This Dracula’s prefers to have blood that has the perfect amount of glucose, not too much and not too little. 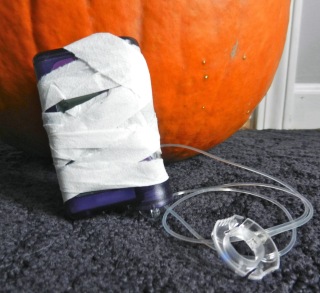 Keeping my diabetes “under wraps” or making sure things are “all wrapped up”. I decided to dress my insulin pump up as a mummy. It was also kind of playing off of the idea of preserving organs and the fact that my pancreas is not preserved in its original working form (yea, that part was kind of a stretch). 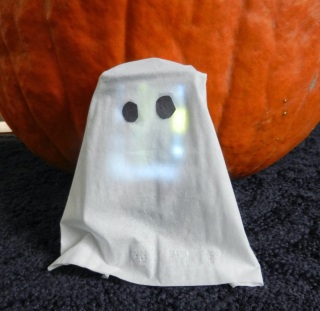 I decided to dress Gigi, my CGM, up as a ghost because it seems like my CGM is always disappearing and then randomly showing up. I love how the ghost “glows” with the light of the meter shining through.

Wishing everyone a very spooky Halloween! May your sweet tooth be satisfied and your blood sugar stay in range!