When I was first diagnosed, I carried a little book around with me to look up the carbohydrates of everything I ate. Since I didn’t always have access to the packaging of the food, I would look up every food and add up all the carbs in my meal. Now, that same information is available right on your smartphone. However, after adding up the carbs for thousands of meals over the years, I’ve memorized the majority of the foods I eat and have gotten pretty good at estimating.Yes, there are times when I over or underestimate, but I generally feel pretty confident in my abilities. 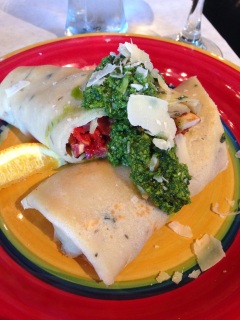 In fact, one could say that I’ve gotten a little too confident and maybe even lazy when it comes to carb counting these days. And this attitude is dangerous. Because when I am significantly wrong in my counts, the results can be pretty catastrophic. The continued importance of being accurate in my carb counting was made abundantly clear to me last week over a meal of crepes.

I was excited to try a new crepe restaurant for dinner with a coworker. Although I knew what a crepe is, I greatly over estimated the number of carbs for the thin pancake like wrap. While a typical crepe is about 10 carbs, I had figured it was at least double, thinking of it as more of a tortilla.

Everything was fine for awhile and I figured that I had successfully calculated the meal. I drove home and decided that I was going to go for a run, never mind that I was still really full from dinner. After my second mile, I started to feel off. I figured it was just from running on such a full stomach. I headed home and showered. It wasn’t until after I finished my shower that I realized that the weird feeling was feeling more like a low blood sugar. I checked my blood sugar. 34!! Ohhh crepe!

I treated the low and eventually felt better, but the experience was definitely a reminder that even after all these years, it’s still important to look up foods that I’m not as familiar with. It’s easy to fall into old habits of guessing and being a little lazy, but I realize it’s definitely worth the extra time to look something up in the beginning than to deal with a low blood sugar later. Next crepe, I’ll be ready.