I know better than to compare a fictional story to real life. But yet I found myself doing just that, trying to comprehend the experiences of a character that were so foreign to me, but unfortunately probably familiar to many others. In the book, the character is an alcoholic, often drinking so much to help her cope with life that she blacks out. Multiple times she wakes with a feeling of guilt, knowing that she did something wrong, something embarrassing, something out of character, but not being able to remember what she did.

“I wake with a crushing sensation of wrongness, of shame, and I know immediately that I’ve done something stupid,” she says.

I’m not going to get into the struggle and devastation that alcoholism can cause for the person and those around them. That is not what this post is at all about. What I do want to focus on is the fact that what troubled this character was the need to remember these missing memories so that she could take full ownership of them and their consequences. Without being able to remember what the character had done during those missing hours, she felt unable to take responsibility for her actions and to feel fully accountable.

As she says, ” I know what I’m responsible for, I know all the terrible things I’ve done, even if I don’t remember the details- but I feel distanced from those actions. I feel them at one remove.”

Why did this aspect of the book strike me so much? It’s not like I could relate to the character. In fact, I think it was exactly my inability to relate to the situation that stuck with me. It’s not that I haven’t made mistakes that I’ve felt guilty for. I’ve regretted or questioned decisions, but I’ve always been able to remember what led to them and fully take responsibility for them. And until I read this book, I’ve completely taken this simple fact for granted. While we do make mistakes and have regrets, we are still in control of our actions. When you take responsibility for what you’ve done, you can learn from it, put it behind you, and move forward.

A couple months ago, I made some changes to my lifestyle. I started following a nutrition and exercise plan. And for 2 months I stuck with it for the  most part. I saw changes in the way my body looked, I lost a little weight, I became leaner and stronger, and my A1c dropped, I felt good. And then the holidays came. With the countless holiday parties, eating more meals out, going on a cruise, and being off my normal schedule, I started making less healthy decisions. I ordered dessert, I snacked into the evening, I ate the fries instead of switching to a healthier side, I grazed through parties eating even though I wasn’t hungry. I got off track.

About a week ago, I woke up in the morning full of regret. On my CGM was proof of the decisions I made the night before, my entire night dancing above the 180 line, dipping and rising. My stomach not quite itself, I knew I was still feeling the effects of my earlier choices. But unlike the character in the book, I remembered what led me to this point. I could recall the unhealthy decisions that I had made. But instead of feeling defeated, I felt empowered! Because by knowing what got me to this point, I also know what I can do differently next time. I can prevent this feeling. Your memories and emotions, as negative as they might be, don’t need to be what holds you back, they can be motivators to propel you forward.

This past week, I got back out my nutrition plan and started fresh. I know that I’ll slip up from time to time, but I’m on the right path. And the regret that I felt, while not desirable, was a catalyst to get me back on a healthy path, and for that, I can’t regret my regret.

I’m starting to have issues with my new endo. Again, the issues that I am having are less about the specific doctors and more about my frustrations with doctor’s and the office not utilizing the technologies that are available to them to their full potential. And misusing the ones that are.

Like most T1Ds, I have a lot of devices that carry a lot of data. And those devices are able to download their information when connected to a computer. But you get slightly different information from my pump (finger prick glucose numbers and insulin delivery amounts) than from my CGM (glucose numbers from the sensor) and I don’t always think that the CGM is the most accurate, especially at the beginning or end of the cycle I wear it.

At my new endo office, my doctor downloads my CGM and pulls up a graph of the last week. She doesn’t take my pump or meter, in fact, I once asked why not and she wasn’t even sure she had the right equipment to download from the pump. I completely trust that my doctor knows what she is doing and her recommendations do make sense. But I’m often left wondering if the recommendations would be the same if we were looking at 2 or 3 weeks worth of data or even looking at glucose numbers from my meter (which are on my pump) in addition to my CGM.

On one hand, I’m grateful. I remember when I was first diagnosed being handed a little log book that I would have to manually write in my glucose numbers. But on the other hand, I’m frustrated with the way things are. I want integration. Maybe it’s time that I align my pump and CGM to compatible companies. Then at least all 3 of my devices would be talking to each other for a more complete picture. But I’m lazy and don’t want to learn a whole new pump or CGM system when I’m generally satisfied with both separately.

And while part of the responsibility is fully on me as the patient, another part is on the doctor and the offices to keep up with changing technologies so that they are effectively and accurately using the data that is available to them. 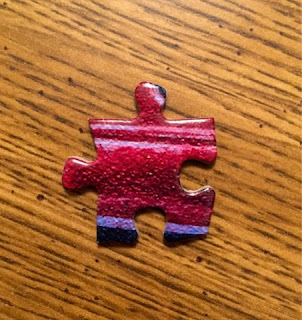 I’m frustrated. But I’m also hopeful. I know that today, my data is more available, accessible, and interpretable than it was 10 years ago. But I know we have a ways to go before every office has the equipment, the skill and the motivation to look at the whole puzzle for every one of their patients, and not just a few pieces.

It was a typical morning as I got ready to head to work. I ran through the checklist for the day:

Gym bag. Do I have my change of clothes? Shoes, socks? Water bottle.
Lunch box. Do I have my breakfast, lunch food, and snacks? Silverware?
Do I have my glucose monitor? Enough strips? Do I have my CGM? Is it charged? Do I need the cord?
Do I have extra supplies? Insulin, infusion set, inserter, reservoir, extra syringes?
Do I have enough fruit snacks if I go low? Maybe grab a couple more.
Phone. And charger.
I need my work badge.
Do I have my hat? And my gloves. Where’s the other glove?
Wallet.
Car keys. And apartment keys.

Twenty minutes later I walk into work, ready to take on the day. I reached into my pocket. Empty. The other? Empty as well.

Back home I go. I’m so forgetful sometimes.

My sister recently found out that she may have Celiac Disease.

As directed, she has completely cut gluten from her diet. While more and more gluten-free options are becoming available both in restaurants and grocery stores, it’s still a diagnosis that comes with its own set of challenges. I’ve watched her as she’s adjusted to this major lifestyle change. I’ve watched her grapple with finding something she can eat on a menu, watched her reluctantly turn down food at an event, watched her patiently pace the aisles looking for the gluten-free options or alternatives to her favorite recipes. It hasn’t been easy, but she has risen to the challenge with tremendous strength, discipline, and optimism.

I truly admire how she has stayed so positive despite having to give up or modify so many of her favorite foods. How she’s taken on the added responsibility of checking every food label and having the discipline to turn down what she knows she can’t have. How she’s gone from having the freedom and ease of choosing essentially any food to having much more limited options. Through all this, she’s faced this change courageously, head on, and hasn’t let it get her down.

I admire what she’s had to do even more because I’ve been so reluctant to make my own dietary changes even though I know it would help me. While I know that she doesn’t really have a choice if she wants to avoid doing damage to her intestines, she still doesn’t complain. I know I should eat less carbs, I know I should cut back on sugar. I know it would help tremendously to stabilize my blood sugars, to lessen my insulin intake. I know it would benefit my overall health, but I haven’t made those changes to what I eat.

I look at what she’s doing and I find it inspiring and motivating. It hasn’t been easy for her, but she’s doing it and using it as an opportunity to grow. As she said to me, “I think of it as a challenge, as a way to stay healthy, learn new foods I might not be used to eating, and definitely learn to cook better with the foods I can eat.” In many ways she’s given me hope that when I finally decide to make (less significant) changes, that I too can do it. And with so many people with both type 1 diabetes and celiacs successfully balancing both, I know that when I’m ready, I will have plenty of resources and inspiration within the DOC too.

No one asks for these types of challenges. Whether it’s balancing blood sugars on a daily basis or completely eliminating a protein composite from your diet, life is full of obstacles. It’s how you approach them that makes the difference.

I’m lucky to have such motivating, positive, and strong role models in my life. People who when handed lemons, they make amazing gluten-free lemon bars with almond crust!